I don’t listen to StoryCorps on NPR very much because most of them seem to be sad — but I did run across one in particular I found quite funny, called Up To No Good. The show itself is generally just brief interviews with random people who have an interesting story to tell. This episode’s topic was about adults recalling stories where they got into mischief, and whether it still affects them today.

Lately I have been hooked on a game app called Make It Rain: The Love of Money (iOS/Android) because it follows in the footsteps of other such “accumulator” (what I call them) games similar to the web browser hit, Cookie Clicker. If you hadn’t heard of Cookie Clicker I must forewarn you, you may blow an entire weekend on it if you’re not careful. There’s not nearly as much story to MIR as CC, but it’s at least a slightly different version than simply tapping the screen — you swipe up as if you’re counting off paper currency from an infinite stack. You start out counting off $1 bills, and once you’ve counted enough you can spend that amount on various upgrades that either increase the amount per swipe, or automatically swipe for you. There are several other kinds of powerups, and can even be accumulated while you’re not even using the app.

I’ve been playing these kinds of games for a while now, and so far have also enjoyed (all iOS, mind you) the questionably-titled Cookie Clickers (unrelated to the web version above), EpicClickers (formerly Hero Clicker), and arguably the best and most advanced app of this kind: AdVenture Capitalist! which I’ve been playing for nearly a year now..

I’ve devised a way to recycle magazines so that they can be turned very simply into a kind of building blocks for structures, although they require hot glue or other adhesive to stack well enough. The basic idea is to (a) tear out a page of a magazine you’re finished with, (b) fold it in half side-to-side so it maintains its original length, (c) fold again the same way, (d) fold again the same way, (e) take a pair of needle-nose pliers and (f) twist one end around upon itself to roll it up, and (g) tape the end to make a neat little cylinder. As I make more and more of these, I’ll make additional posts about structures I’ve made with them — and each blocks only requires a single magazine page. Just imagine how many things could be made, Minecraft-style, with only a single magazine.. 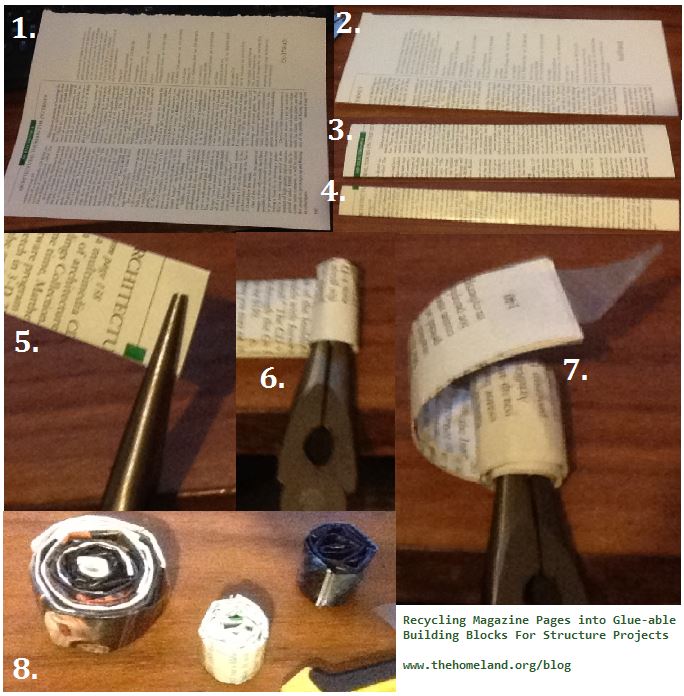