Does Course Teach Fetus is like Cancer? NO. Here’s Why.

Making the rounds in April 2019 is the context-less capture of a biology course slide that lists similarities between a fetus and cancer. The spin zone is currently at the ready to condemn it, by interpreting that the course is teaching students “how much a fetus is like cancer.” 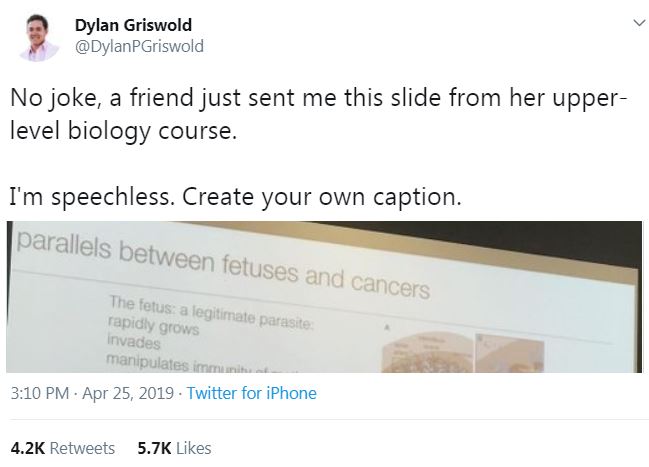 Possibly the worst element of this influential tweet is the line, “Create your own caption,” rather than, “research the issue before settling on a conclusion.”

Summit.News picked up on it, and pretty quickly ran a spin version condemning such a teaching, that “Biology Course Teaches Students a Fetus is Just Like an Invasive Cancer.”

However, a respondent to the tweet is quick to point out, that the class is actually an immunology course, and the slide demonstrates how poorly the body is able to interpret cancer interactions with the body, compared to fetal interactions with the body, in that the cancer is so adept at outwitting the immuno-response in a similar way that a fetus does, being half-foreign to the mother.

“This has nothing to do with abortion: it’s an immunology course, and they’re describing the process of how the tumor mimics biological mechanisms that developed for supporting fetal growth. This allows the tumor to evade the immune system, enrich blood supply, engraft in tissue”
(Tw source)

“The point is that your biology often can’t tell the difference between a pregnancy and a tumor, and that allows the tumor to evade an effective killing response. This slide is a challenge to think about the challenges of treating cancer.”
(Tw source)

Tumors often make fetal proteins that allow them to evade the immune system, keep growing w/out regulation & intrude into other tissues. The classic example is alpha-fetoprotein, found in fetal liver and liver tumors. en.wikipedia.org/wiki/Alpha-fet…”
(Tw source)

“My industry is cancer diagnostics: we know that pregnant women will test as false positives for a number of tumor markers. I do also have a patent on a drug that uses fetal transferrin (transports iron from the placenta) to target chemotherapy to solid tumors.”
(Tw source)

“For anyone concerned about “legitimate parasite”, this is about the self/non-self recognition by the immune system. It’s the reason we can’t get transplants or transfusions from most strangers. Fetuses are only 50% related to mother; immune system should see them as “non-self”.”
(Tw source

Another respondent, a PhD, chimes in…

…and lists a few examples:

Comparison between two things is not “teaching that one thing is the same as the other,” unless, perhaps, it suits your narrative.

2 Responses to Does Course Teach Fetus is like Cancer? NO. Here’s Why.