Is That Ship Loaded With Syrian Refugees? NO. Here’s Why.

Making the rounds lately is a photograph of hundreds of people loaded onto a single ship, practically spilling out over the edges.. along with the claim that it is a photograph of the Syrian refugees of ~2015 — except it’s from 1991. For some reason in the popularized version has the letters L and O out of the ship’s name VLORA are removed or blurred, but in other photos from that particular even show the ship’s letters very clearly. 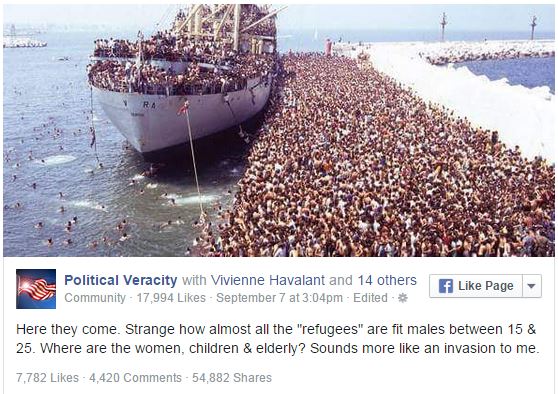 This article, which also seems to use it as a broader illustrative purpose rather than for historical merit (and even seems to label them as refugees from Libya), seems to describe a general migration pattern all flooding into Europe over the years.. but also has a lot more images of the same VLORA ship and from different angles.

I couldn’t locate the original photographer’s name for credit, but if known I’d like to know also, perhaps also if they could give an account of what they saw that day.

According to the below YouTube video, in 1990 the social unrest and economic collapse after the fall of a communist regime lead to a mass migration from Albania to Italy, all aboard one ship called the VLORA. In 1991, this ship loaded down with passengers arrived at the Bari pier and Italian administrators were unprepared for the arrival, resulting in many deaths.