Interpretation of Taeyeon WHY and Starlight MV Meaning

Taeyeon’s new MVs Starlight and WHY seem to be telling a story, but the narrative isn’t really very clear yet. Here’s my guesses about what the story might be — and these are just my guesses.

If you need a refresher, here are the two music videos in order they were released.

1. I think it’s pretty clear that Dean and Taeyeon’s characters are ‘together’ romantically, probably in the first stages of the mutual crush since the lyrics of Starlight seem (to me) to describe only the beginning of their relationship where the squishy teddy-bear feelings are overwhelming, where everything else that was ordinary before seems like it can be viewed in a new way.

2. According to the lyrics, Taeyeon was “used to being alone” and I believe what the song is about is her encounter with “love” itself, not specifically Dean. The reason I think Dean isn’t the starlight she mentions, is because of the memorial site and what she does there. A lot of people seem to think it is Dean’s memorial, but I don’t think so. Bear with me here.

3. Taeyeon receives a message from a mysterious M74 on her pink pager device, and speaks on the phone to M74 while Dean is standing next to her. The message she receives is bad news. M74 is probably someone who lives nearby the memorial that has been set up for the former love or others that might have known the former love, such as a nurse who found the old love’s contact info and notified her of the death. In America, nurses and doctors often use pagers.

4. Taeyeon and Dean date for a little while, all the while that Taeyeon is thinking about M74’s pager message and phone conversation in the back of her mind because of some scenes where Taeyeon is alone after meeting Dean, as if she is still thinking about something else, but still happy at the same time. I think she is remembering what it was like to have the starlight feeling again in her life, and how refreshing it is.

5. At the end of the Starlight MV, Taeyeon seems to express visually that “wait for me, I need to do something” and then gradually leaves, but only for this errand. She’s not breaking up with him, she’s just running an errand that involves M74. If you notice at the end of Starlight and the beginning of Why, Taeyeon is shown walking with the same kind of stride, as if Why is continuing the story. 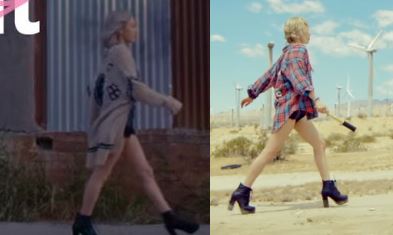 6. In the Why MV, we discover that M74 is a location according to a street sign. I am guessing M74 is the approximate location where the memorial is placed. In America, the kind of memorial on the ground is very common for people who have died in a car accident. The memorial is not where they are buried, but serves as a marker for where the memorialized person actually lost their life, and people who knew the person from the area they died can visit that spot without having to travel to the place they are actually buried in case it is far away.

7. Taeyeon leaves photographs of herself and Dean together as a sign to the dead love that she has moved on and found another starlight. In American cemeteries, if you see a little rock or a small pebble sitting on someone’s tombstone, that is a sign that a loved one who was mourning for the person who died believes their mourning period is over and they are ready to move forward, as a kind of closure. Not that they’ll never miss them again, but that they’re finally at a point where they have realized the loss will not be undone, and they have decided to move forward in their life without them. I think the photographs Taeyeon leaves at the memorial is like the little stone.

8. The lyrics of Why seem (to me) to suggest that Taeyeon has put off saying an official goodbye to the old love for too long, and needs to finally say it, so she can move on.

9. She was nervous about ever having to say goodbye forever, and she tries several different things while she’s on her way there to avoid doing it. The swings, the bubbles, the reading, skateboarding, the dock, are all just distractions from actually saying goodbye, but once she has finally said goodbye to the old starlight, it she wondered why it could have been as hard as she thought it would be — because now she realizes, with Dean, there are other starlights out there.

10. I don’t believe this is Dean’s memorial because Taeyeon doesn’t seem sad about it at all, as if she still has Dean to go back to, and how Dean is the new starlight. The scenes where Taeyeon jumps into the pool is like her uncertainty about “the jump” of saying goodbye forever, but actually feels refreshed once she does it. When she turns around after leaving the memorial, she doesn’t look sad, but optimistic for the future especially one that includes Dean.

11. I think the combination-lock message is from Dean, who gave it to her before she left. The unlocked message repeats what the original pager message said, as if Dean wants to remind her “Please remember me, too” in her quest to settle ties with the old love. The combination on the lock is “apple” and the nickname for New York (from the back Dean’s jacket when they bump into each other) is also called The Big Apple. The pink of the message paper also matches the pink of the building Dean and Taeyeon were standing next to when she got the original message, so since she received “miss me” from M74 originally and went to that location, she now receives “miss me” from Dean in the combination lock and will go back to him now.