Inspired by a reddit post, I decided to formulate my own ranking of the Destiny ladies (including non-humans), and posted it to a one of the larger Destiny FB groups to much discussion.

How would you rank Mara, Eris, Tess, Ana, Suraya, Amanda, Ikora, the Mysterious Stranger, Lakshmi, Tyra, Petra, and Sloane? I added Omnigul and made Failsafe’s alter-egos two, because I like the sarcastic one better. I almost used the woman statue out in front of the Trotsland church in place of Omnigul (and still ahead of Amanda, no less), but the grid had filled up perfectly by then.

This ranking is, so far, only populated by characters released since the Warmind expansion in May 2018, so I don’t know of the future female characters. I am also aware of the Stranger’s identity, but left her named Stranger. I decided not to add my female guardians, and was also originally going to put in a few of the roaming NPC no-name technicians from the D1 tower and reef, but the grid lined up so well =) Anyhow, here’s the list for you to rage over (click for larger size) =) 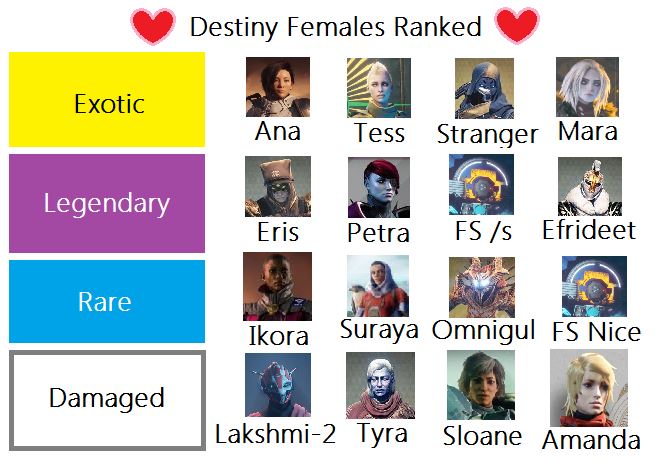 Of particular issue in discussion was that Tess needed to be swapped with Amanda, as there are quite a few Amanda fans out there — but I am from the south and I am well over quota for hillbilly-sounding ladies, plus to me she’s about a 3/10. Tess ranks so high for me, being not only a fist-biter gorgeous to me, but she is also voiced by Claudia Black, who is the actress which played Aeryn Sun, a hot takes-no-BS warrior character from the classic sci-fi show (that I generally dislike with her as an exception) called Farscape.

I would have ranked Ikora higher, as she is really pretty to me, but she is just so irrational in her attitude and dialogue that I don’t think she has the guts to stay in Vanguard leadership. She just so whiny and moaning some kind of “oh it is all my fault” garbage, plus she now represents a barrier between our guardian being able to play whichever story mission we want. Her sky-is-falling type of reaction to things puts her way down in rank for me. I loved her voice actress, who played Zoe Washburne in Firefly, tho =)

The “damaged” category heading doesn’t mean emotionally-damaged (but is a pun), but instead refers to the category of armor you have on at the beginning of the campaign, which is listed in your inventory to the effect of, “Boots (damaged)”..