K-Pop Identifying Guide: Which one is Taeyeon?

Help finding out which member in a music video is Taeyeon.

This is an ongoing series to help people new to K-Pop/Korean Pop, to identify the members within a group. As westerners or other people unfamiliar with more typical facial structures of other cultures, being able to tell one person from another can be difficult at first.

I am easily the biggest SNSD fan that I’ve ever known in person, but for a long time I couldn’t distinguish between Seohyun and Yuri very easily, although now it is very easy to me.

This series examines 3 music videos that each Kpop star appears in, and points out which one they are.

Perhaps the easiest Kpop music video to tell Taeyeon apart in, is “Oh!” by Girls’ Generation/SNSD: 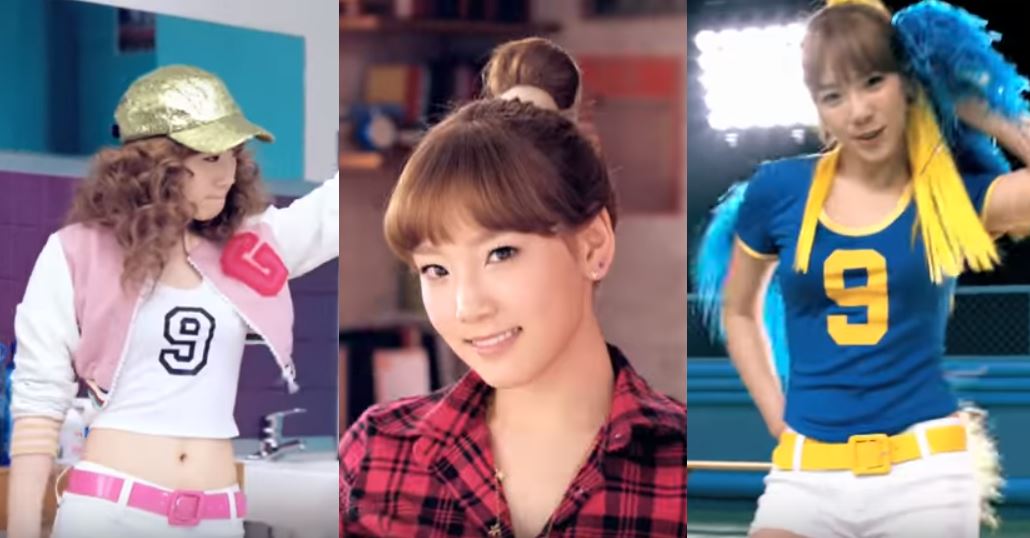 The next music video is “The Boys” by Girls’ Generation/SNSD:

Taeyeon, whose birthday is March 9:
– In the petals/closeups scene, has on a light-beige dress with a frilly neck
– In the group dance scenes, has pink hair end-highlights, sometimes with a top with a V-shape front design

The third test of your identifying prowess is the MV for SNSD subunit TaeTiSeo, called Twinkle:

Taeyeon, who also does voice-overs for Korean-Ver Despicable Me films,
– Is the first to step out of the vehicle,
– Stands on the red carpet on the right side,
– In the 1st hallway scene stands in the center,
– Wears a yellow top, with a long suspender design onto leopard-print short pants,
– In the white prep scenes has a blue gown and hair up in multi-colored rollers and purple flower,
– In the 2nd hallway scene wears a shimmering black skirt with wide red belt,
– In the band-stage scene is on the left position, has a flowery skirt,
– In the 1st staircase-stage scene is on the left in a yellow dress,
– In the 2nd staircase-stage scene is in the center in the leggings,
– In the last dance scene, has somewhat business-like skirt and suit-print shirt.

If you have any other music videos, or other videos in general you’d like help identifying whether Taeyeon is in them, or if you’re a big fan of Taeyeon, like me, then join me over at the Taeyeon International Fan Club on FB.. we have over 32,000 members =)